Basseterre, St. Kitts, May 09, 2017, (RSCNPF):  An ongoing combined operation by the Royal St. Christopher and Nevis Police Force and its Law Enforcement partners has resulted in the arrest of eight (8) persons and the seizure of two (2) illegal firearms and ammunition on Monday (May 08).

Seized at one location was (01) Smith and Wesson .40mm pistol with a magazine and 9 rounds of ammunition of which seven (7) were hollow point rounds.  Also seized was another magazine with four (4) rounds of 9 mm ammunition, a number of ’20’ gauge shotgun rounds, a bulletproof vest, two masks and several pieces of camouflage clothing.

A subsequent search on Monday (May 08) netted another firearm and a magazine. One (1) Kilo of marijuana was also discovered and seized.

Both searches were conducted on properties in Conaree.

Commissioner of Police commended the Officers involved and said,” I want to commend you for your vigilance, this investigation took time, you followed every lead, you combed through the information and you delivered.. we have removed another firearm from our communities.”  He added,” I want to express our thanks for the support from our partners,  collaboration works, let us continue.”

This seizure brings to fifteen (15) the number of illegal firearms removed from our communities so far in 2017. 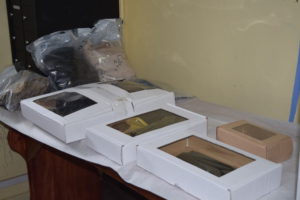 MAURIEL KNIGHT IS THE NEW DEPUTY CLERK OF THE ST. KITTS AND NEVIS NATIONAL ASSEMBLY

OFFICIAL GAZETTES OF ST. CHRISTOPHER AND NEVIS TO BE DIGITIZED AND MODERNIZED FOLLOWING SUCCESSFUL PASSAGE OF BILL