BASSETERRE, ST. KITTS, MAY 11TH, 2018 (PRESS SEC) – Prime Minister Dr. the Honourable Timothy Harris and members of his Cabinet had a four-hour-long consultation meeting with officials from the St. Kitts-Nevis Chamber of Industry and Commerce (CIC) today, Friday, May 11th, 2018.

The meeting, which took place at the St. Kitts Marriott Resort, covered the private sector agenda with a focus on the business environment, disaster mitigation, education, and national security.

Prime Minister Harris’ administration meets regularly with the CIC, a major stakeholder and partner in the country’s socioeconomic development.  “We have always put premium value on these consultations,” the Prime Minister told the meeting’s attendees.

Prime Minister Harris went on to note that he looked forward to having more regular meetings with the CIC.  “With more regular meetings, we can certainly achieve more,” the Prime Minister who is also Minister of Finance said, while adding that his Government has identified increasing property ownership as a critical area in which greater involvement of the business community is welcome.

Also in attendance were the Financial Secretary, Mrs. Hilary Hazel; Permanent Secretary in the Office of the Prime Minister, Mr. Andrew Skerritt; Advisor in the Ministry of Finance, Mr. Howard Richardson, and Commissioner of Police, Mr. Ian Queeley.

“We are indeed quite heartened,” Mr. Lawrence said of the Government’s generosity with its time and support, adding, “It is our desire to collaborate with Government and have open dialogue to the fullest extent possible toward contributing to good and effective Government policies, legislative actions and decisions.”

The CIC President also noted that, “Just about every decision and action taken by Government affects the private sector in some way.  We believe it is therefore prudent and useful for Government to engage the private sector through the Chamber at all levels of discussions and deliberations possible so that it affords itself a different and, in some cases, a new perspective on issues that can only lead to better informed and calculated decisions and policies.” 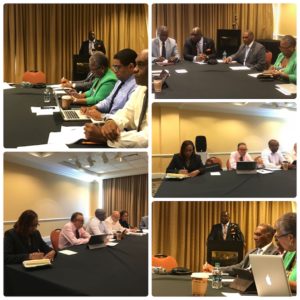 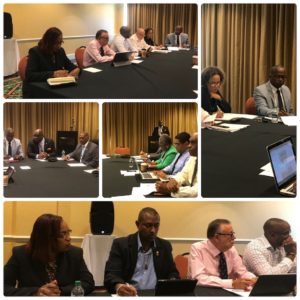 Description of Coat of Arms [official]