Basseterre, St. Kitts, May 14, 2018 (SKNIS): Scores of young people affiliated with the Explorers Movement of the Ministry of National Security were congratulated for their positive stance to lead productive lives and reject antisocial elements within society.

On Saturday, the young people from the Explorers Clubs based in St. Peters, St. Pauls, Shadwell, and Mol-Phil (Molineux-Phillips) marched through the streets of Basseterre for the culmination of the May 10 to 12, Eight Meeting of the Technical Working Group (TWG) on Crime Prevention that was hosted at the St. Kitts Marriott Resort. A rally was held after the march at Independence Square.

At the rally, Deputy Prime Minister and Minister of Youth, Honourable Shawn Richards, said he was honoured to participate in the event and noted the importance of the march against crime.

“Only through education, social activism, and community and social participation can we bring about real and sustainable change within our society,” he stated.

While noting the government’s commitment and numerous initiatives to enhance youth development in the twin-island federation, the deputy prime minister said: “We see here in St. Kitts and Nevis that almost every programme, whether it be tourism education, agricultural resuscitation and food security, or national security and citizen safety, all target our nation’s youth. The reason is simple and clear. The youth are not the problem, but they are the answer.”

Minister Richards was firm in his support for the youth population and expressed that more citizens and residents should be more willing to celebrate the accomplishments of young people.

“I beseech you all to continue doing as you do, working as you work, speaking as you speak, and living as you live, so that your words, deeds, actions and lives will be a testimony of hope, a beacon for a better tomorrow,” he expressed.

Commendation was further expressed to the local Ministry of National Security, United States Agency for International Development (USAID), Caribbean Community (CARICOM) Secretariat, the Organization of Eastern Caribbean States (OECS), and the United Nations Development Programme (UNDP) for their support to the 8th TWG, which focused on at-risk youth and vulnerable populations. The conference was an initiative of the United States’ Caribbean Basin Security Initiative (CBSI). 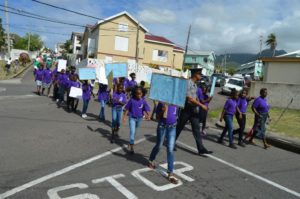