IMF IDENTIFIES CLIMATE CHANGE ADAPTATION AS A KEY AREA OF FOCUS FOR ECONOMIC SUSTAINABILITY IN ST. KITTS AND NEVIS 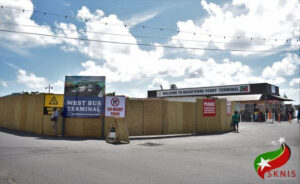 BASSETERRE, St. Kitts, October 30, 2019 (Press Unit in the Office of the Prime Minister) – Passengers and omnibus drivers who ply their trade along the western side of the country will soon benefit from a much-improved bus terminal facility and amenities when construction work on a new West Line Bus Terminal is completed.

That’s according to Minister responsible for Public Infrastructure, the Honourable Ian Patches Liburd.

“For sure, the passengers who are using that terminal and the bus drivers will see improved traffic management and improved safety there. We are also ensuring that the passengers will be protected from the vagaries of the weather. If you look at the pre-existing one, whenever rain falls you have to run for shelter and that situation will be a thing of the past when the new terminal is built, so that in itself is a good thing,” said Minister Liburd.

The minister further stated that, due to limited space, the new facility will not be a replica of the East Line Bus Terminal, which was opened in December of 2018. He, however, noted that, “We are working with what space we have available to be as effective and efficient as possible.”

The construction area is presently cordoned off to vehicular and pedestrian traffic.

Minister Liburd indicated that the foundation work, which is currently being undertaken, is expected to be completed in four weeks.

“The prefab structure is already ordered, and I am advised that it will be here in the next two weeks, so by the end of November or early December that terminal should be fully operational,” the minister added.

Construction work on the West Line Bus Terminal is being carried out by E&J Construction.

IMF IDENTIFIES CLIMATE CHANGE ADAPTATION AS A KEY AREA OF FOCUS FOR ECONOMIC SUSTAINABILITY IN ST. KITTS AND NEVIS