PM HARRIS DESCRIBES “TO GOD BE THE GLORY” CONCERT AS IMPRESSIVE; THANKS PATRONS AND PERFORMERS

BASSETERRE, ST. Kitts, November 27, 2018 (Press Unit in the Office of the Prime Minister)– Prime Minister Dr. the Honourable Timothy Harris has described Sunday’s (November 25) “To God be the Glory” gospel concert as impressive, and congratulated all of the artistes and entertainers from home and abroad for what has been for many a most memorable experience. The show was headlined by popular Jamaican performer, Minister Marion Hall. Sunday’s event, which was the largest concert ever to be staged in Tabernacle, was described by Prime Minister Harris as “a gift” to the people of St. Kitts and Nevis. The Prime Minister is celebrating 25 years as the distinguished Parliamentary Representative for the people of Constituency #7 and a beloved son of the soil. Dr. Harris has, on several occasions, credited his success over the last 25 years to the love and support of the people, as well as the will of God. The “To God be the Glory” concert drew persons from all walks of life to the grounds of the Edgar T. Morris Primary School, as patrons from the length and breadth of St. Kitts and Nevis came out to socialize and enjoy the best of gospel music and songs. Like the domestic acts, such as Mrs. Shirley Williams, Ms. Dawn Williams and Mr. Nyquan Nisbett, Minister Marion Hall gave an excellent account of herself, as she performed a number of gospel hits much to the delight of the large crowd. At the end of the night, patrons were heard using words such as “lovely, unbelievable, great, and fantastic,” when asked for their feedback on the concert. 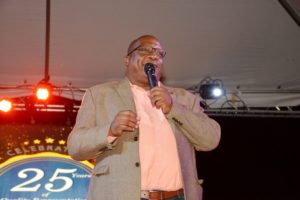 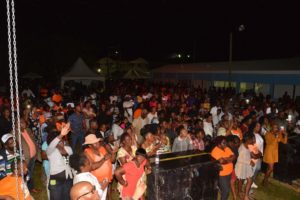